What is Grass Grub?

Grass Grub (Costelytra zealandica) are the larvae or immature stages of the common brown beetle that appears at dusk in spring and summer. While the beetle can cause economic problems the grub (larvae) is a serious pest of lawns.

Click to read more about Grass Grub identification and control. 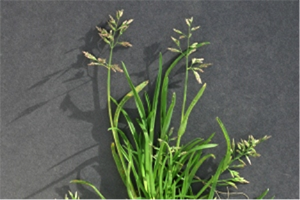 Annual poa has been called by many different names, sometimes referred to by its botanical name Poa annua, or simply poa, or names such as winter grass, annual blue grass and annual meadow grass.

It is one of the more common and troublesome weeds in turf of temperate parts of the world, and yet it often isn't readily noticeable. This is because it is a grass itself, and quite a small grass, so it can look just like another turf grass. Because of this, some green-keepers have decided simply to live with it and even encourage it within their turf. But other green-keepers consider it to be a weed because it is very short-term in nature, dying off as soon as the weather becomes a bit dry, or there is too much treading of the turf with sports being played on it. 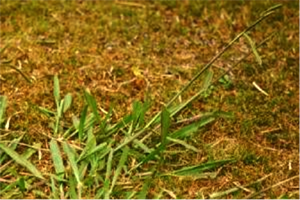 Paspalum is a grass weed which has very short stout rhizomes, which join plants together to form dense clumps. This weed is mainly a problem in turf, as it forms unsightly clumps in lawns which are difficult to remove selectively. The seed-heads are formed on tough stems, which generally do not get cut by reel mowers.

As paspalum is such a large grass, it also grows successfully in waste areas. It can cause problems in orchards too, as it is fairly resistant of many of the herbicides used under fruit trees. In pastures, it can be debated whether paspalum is good or bad, as it does provide feed during dry summers, but it can result in poor animal production over winter because it out-competes perennial ryegrass in summer, then when it grows poorly through winter, there is less ryegrass available to give winter production. As paspalum needs warm conditions due to being a C4 species, it is mainly only a problem in the North Island, and this is also why it is generally not very active in winter.

Click here to read more about Paspalum identification and control.

Couch (pronounced "kooch"; Elytrigia repens Poaceae) is one of the most troublesome rhizomatous weeds in flower gardens and crops, competing for light, nutrients and water, and generally looking unsightly in gardens. It was formerly known as Agropyron repens.

Although most perennial weeds do not tolerate constant disturbance by cultivation, couch is one of the best perennial weeds at re-growing rapidly following disturbance and building up food reserves in the rhizomes again, ready for the next disturbance. Although it is found throughout the year, it tends to be less active over winter. It often grows unnoticed in ryegrass pastures because the leaves and flower stems look much the same as ryegrass. But when the paddock is cultivated to grow a crop, it is suddenly very noticeable as it regrows rapidly from the uncontrolled rhizome system to compete strongly with newly sown crop seedlings.

Click here to read more about Couch identificiation and control. 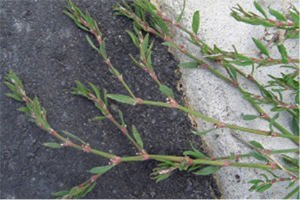 Wireweed is closely related to willow weed, and is also a summer annual, but is able to establish even earlier in spring than willow weed and most other summer annuals. It tends to establish in quite wet soils, and is often found in crops established early in spring when the soil is wetter than is ideal for crop establishment. It is also commonly found in gateways and along paths where it can establish in the bare soil caused by treading. Once established, it is very tolerant of treading. In turf, it can establish in sports grounds where grass has been damaged by winter sport, such as goal mouths.

Click here to read more about Wireweed identification and control. 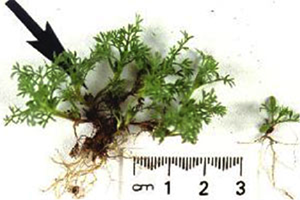 Turf weeds that put prickles in your bare feet when you walk across a lawn are never popular, especially in home lawns and recreational areas. Onehunga weed is probably one of the most hated turf weeds in New Zealand for this reason. It is an annual weed which is very small in size, usually fitting beneath the blades of the mower without barely being touched each time the lawn is mowed.

It normally acts as a winter annual. This means it spends most of summer as a dormant seed in the soil. It germinates in autumn once the soil becomes moist but before the lawn recovers from summer dryness. If the lawn cover hasn't died back over summer, Onehunga weed seedlings have much more trouble establishing. Once they are established, the plants grow throughout winter then produce clusters of spined fruits near ground level (arrowed in the top picture) ready for some unsuspecting passer-by to step on them and distribute the fruits elsewhere in the lawn in their feet or jandals. Once the lawn begins to dry in summer, the plant dies, having completed its life cycle, though the spiny fruits are often left with spines sticking upwards even though the plant has died. It doesn't always grow as a winter annual though, as it can also establish in spring under some circumstances.

Click to read more about Onehunga Weed identification and control.